Skip to Content
Home Celebrity News The Lord Of The Rings: The Rings Of Power – Season 1 Review

While Hollywood has been hype with reboots and remakes in recent years, it’s still a difficult task to tinker with certain franchises. the case of the lord of rings story created by JRR Tolkien. Protected from adaptations for decades, the plot gained its first representation on screens in the early 2000s, in a successful trilogy led by Peter Jackson.

Since then, no one, not even Jackson himself, has managed to replicate the entire aura of magic and enchantment that pervades Middle-earth. with that responsibility that the Prime Video launched this year The Lord of the Rings: The Rings of Power, the first TV series in this universe. And the journey, like that of many of Tolkien’s characters, was full of ups and downs.

Starting with the period in which the story takes place. Not getting the rights to the First Age (which tells of the creation of Middle-earth) and the Third (shown in the lord of rings and The Hobbit), a amazon was left with the difficult task of adapting the Second Age, a story of the medium whose events were narrated only in the Appendices of The return of the king. So there was a lot to fill in in terms of characters and journeys, and the production wasn’t always successful.

A good example of this is the core of the Southern Lands. While the location plays a major role in the season finale, the characters who guide the audience are far from captivating. The romance between Bronwyn and Arondir is not convincing, young Theo adds little when on screen (and he gets a lot of screen time) and not even the arrival of other names is able to improve the weak narrative construction of a place that had much greater potential.

There are also mistakes when we talk about Galadriel, considered by many to be the protagonist of the story. The face of most posters and promotional materials for the series, the elf arrived with a fierce, warrior-like personality, very different from the ethereal being of the Third Age. But the problem is not exactly that. In fact, the construction of Galadriel’s personality was uneven due to moments when her actions sounded exaggerated, just to serve the persona created for the series.

Not that the character couldn’t be a strong, The point is that, at various times, this composition sounded empty, as if the production refused to evolve the elf. There’s a correction on that later, but there’s no denying that the character was harmed by that, in many instances, refused to go further.

In the land of Mordor where shadows lie 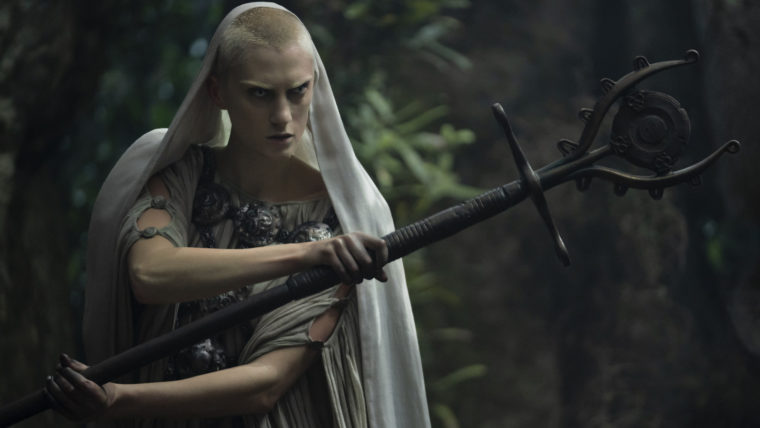 A strong story, with great heroes, also calls for a villainous height. So, The Lord of the Rings: The Rings of Power spent much of the first season nurturing the mystery of who Sauron would be. In the period told in the series, the first great villain, Morgoth, has already been defeated, and his pupil has not yet transformed into the entity shown in the Third Age. Therefore, there was great expectation for the construction of the villain that, like other centers, also had good and bad moments.

In part, there is a value in creating a great mystery, as it generates interesting anticipation in fans. On the other hand, there is a feeling that the writers got it wrong at various times and left everything so enigmatic that curiosity turned to frustration. Narratively speaking, more was lacking in the course of the episodes, to keep the flame always lit. Instead, the path chosen by the series was to mislead the public, in a movement that generates a lot of repercussion on social networks, but not necessarily the best in terms of script.

Interestingly, the ups and downs are also revealed in the technical part of the series. Announced as the most expensive production in the history of streaming, The Lord of the Rings: The Rings of Power there are moments that take your breath away in terms of sets and especially costumes. At the same time, there are scenes where the computer graphics is clear, with the scenery standing out too much from the characters in the foreground. With such a high budget, a slip that shouldn’t happen.

Despite all these questionable points, there is no denying that the balance of the series is positive, especially for the beautiful rescue of the values ​​that Tolkien placed in his work. The first two episodes, led by JA Bayona, did a good job of showing Middle-earth in the Second Age, creating a familiar feel for fans of Jackson’s trilogy. The friendship between Elrond and Prince Durin also played an important role, in showing how the union between two races is extremely important for peace and the fight against those who wish to cover Middle-earth with darkness.

Still on this topic, it is impossible not to talk about Hairy Feet. Ancestors of the hobbits, the characters won over fans from the very first scenes, showing all the characteristics that are important to Tolkien: a beautiful relationship with nature, generosity, unity and, above all, a lot of joy in living. It becomes impossible not to smile when the Hairy Feet start moving from one region to another and begin to sing, anticipating what they will find on the road ahead.

With all these points, The Lord of the Rings: The Rings of Power It starts off irregularly, although it has its heart in the right place. With the second season already in production, Amazon would do well to worry less about social media reactions and focus more on the story it wants to tell, without fear of letting go of what didn’t work in the first season.

All episodes of the first season of The Lord of the Rings: The Rings of Power are available on Amazon Prime Video.