Skip to Content
Home Celebrity News The Lord of the Rings: The Rings of Power | Review 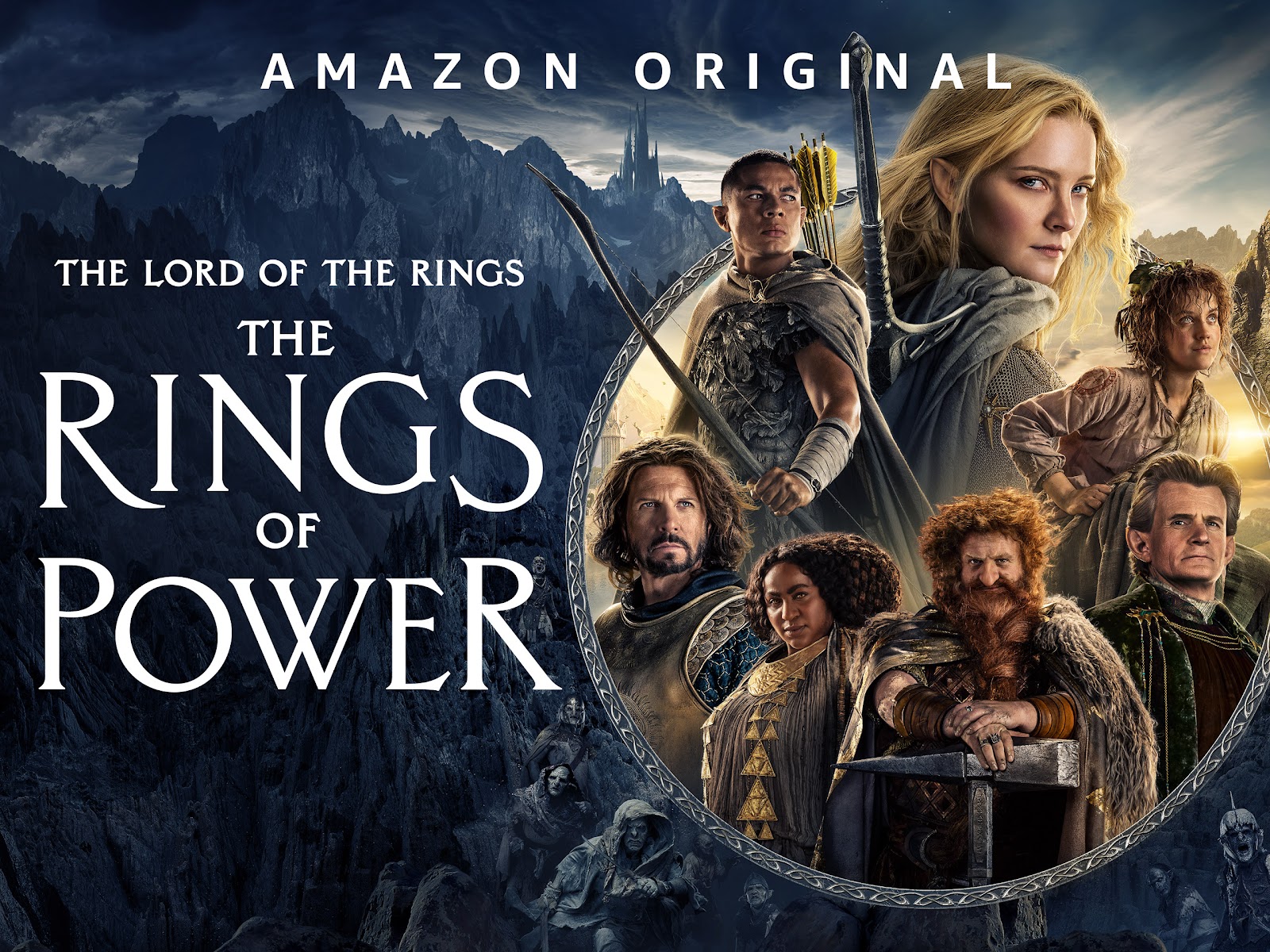 Compared with the books, with Peter Jackson’s movies, a vast and complex universe, and considerable limitations when it comes to copyright…. the task of bringing The Lord of the Rings: The Rings of Power s screens, complicated. Regardless of how much money Amazon can pour into production exclusively for its streaming service, Prime Video.

As the title points out, the series is intended to show the making of the title’s power rings, the three from the elves, seven from the dwarves, nine from the humans, and the One Ring. For this, the production chose to accompany different characters from Middle Earth, as they discover a growing evil in the region.

Galadriel (Morfydd Clark), the only one who was sure of the existence of evil, faces a journey to reaffirm her belief, convince more people and accumulate allies. Among the Elves who first deny the survival of evil, Elrond (Robert Aramayo) must get a valuable resource from his friend Prince Durin IV (Owain Arthur). The unexpected core of hairy feet, the ancestors of hobbits, welcome a mysterious stranger into their community. Already the people of the southern lands, and the elf Arondir (Ismael Cruz Cordova) are the first and face this evil directly.

There are several narrative cores, which will eventually meet and separate as the story progresses. Nothing unexpected for a story of such magnitude. The problem lies in the way in which these cores are worked in isolation. There is no balance between the development of the stories, creating a certain discrepancy in the passage of time, and mainly in the interest of the public for this or that nucleus. Throughout the eight episodes, the urgency and development of the stories varies, making our appetite for one group greater than for the others. And as time is divided, that appetite is sometimes not fully satisfied. 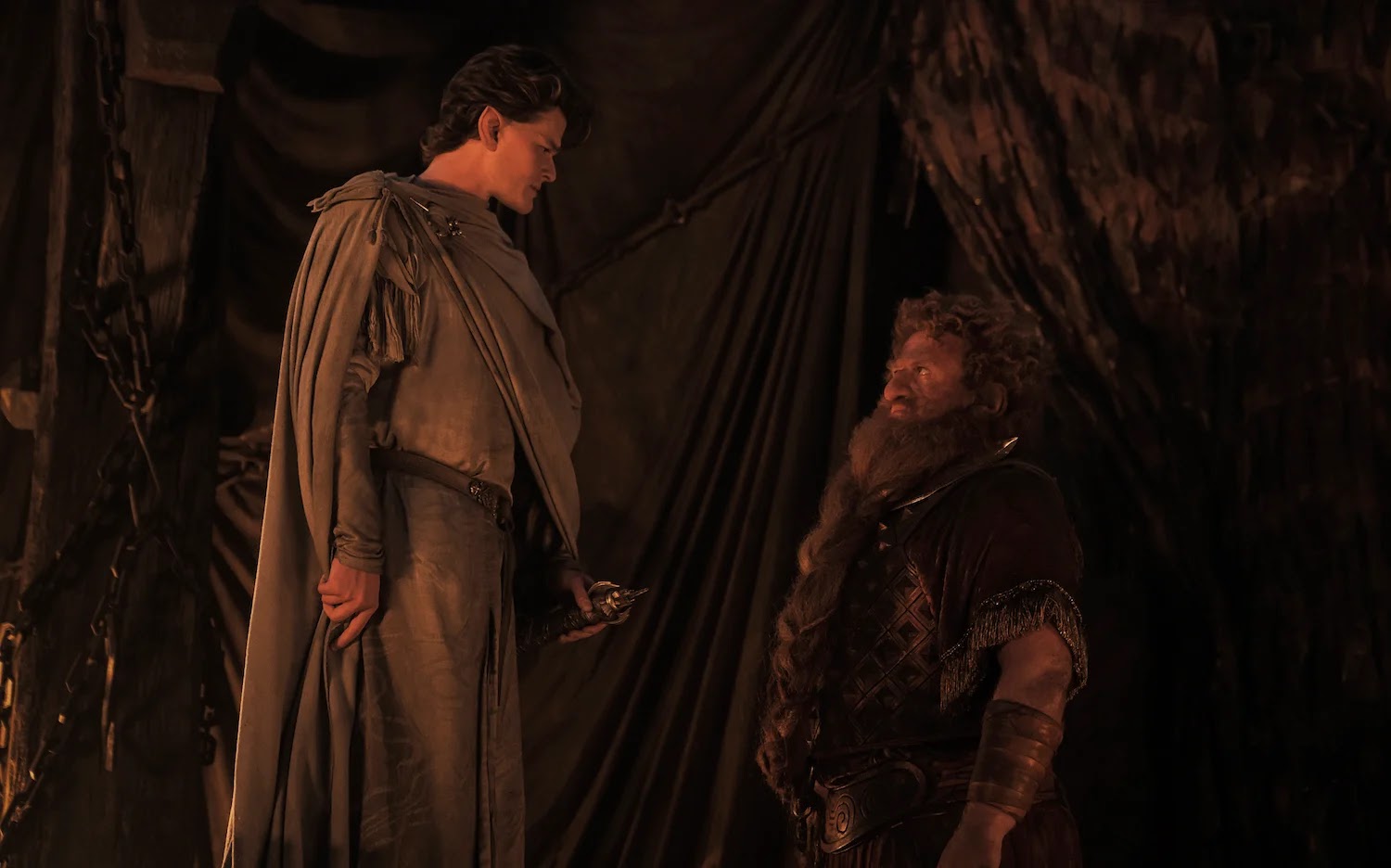 Another stalemate that may push some away from the more measured pace, especially in the introductory episodes. Anyone familiar with JRR Tolkien’s work was probably already expecting a particular pace for the adaptation. But even, these must have been surprised by the slowness and repetition that the narrative chose in many moments. As with Galadriel’s inflexibility and obsession, and Isildur’s journey.

Stuck dialogues, and dubious decisions complete the package of flaws to be fixed in future seasons. After all, it is understandable that the screenwriters are tempted to bring to the lines a certain pomp that they believe that such a vast universe deserves, but the result was artificial and shallow. But choices such as abandoning a fort to defend, taking the queen to the battlefront or even using a supposed magical artifact in a mechanical way, for a task that could be performed without it, are difficult to explain. 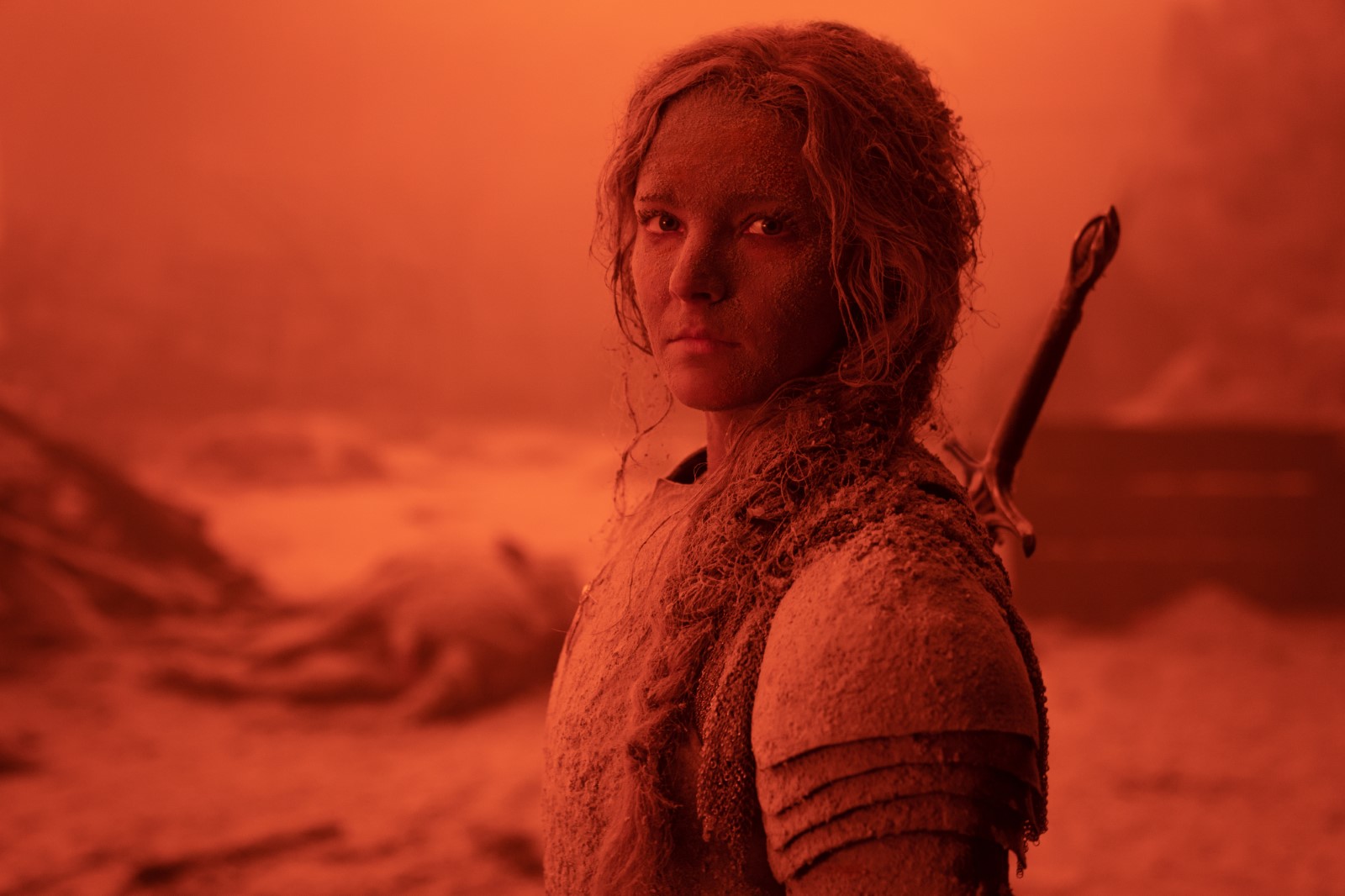 Contrary to what one might think from the above paragraphs, I really enjoyed the delivery of The Power Rings, especially for the delivery in the final episode. True, I believe that if the series had a more uniform pace, this ending could be better worked out, using more than one episode, but it works, and it rewards those who waited an entire season for it. Especially in bringing some logic to Galadriel’s rigidity I mentioned above. She was being influenced, hence the blind obsession.

And since I started talking about characters, Morfydd Clark’s Galadriel, despite being too rigid (or maybe because of it), is strong and full of nuances in relation to her real motivations. The friendship between Elrond and Durin, an interesting parallel for those who like the duo Legolas and Glimi. While the events around her point to both the nobility, faithfulness, and a certain naivete of the elf. In Celebrimbor (Charles Edwards), we see as much ingenuity as a seed of greed, if something is going to sprout from there, the future will tell. 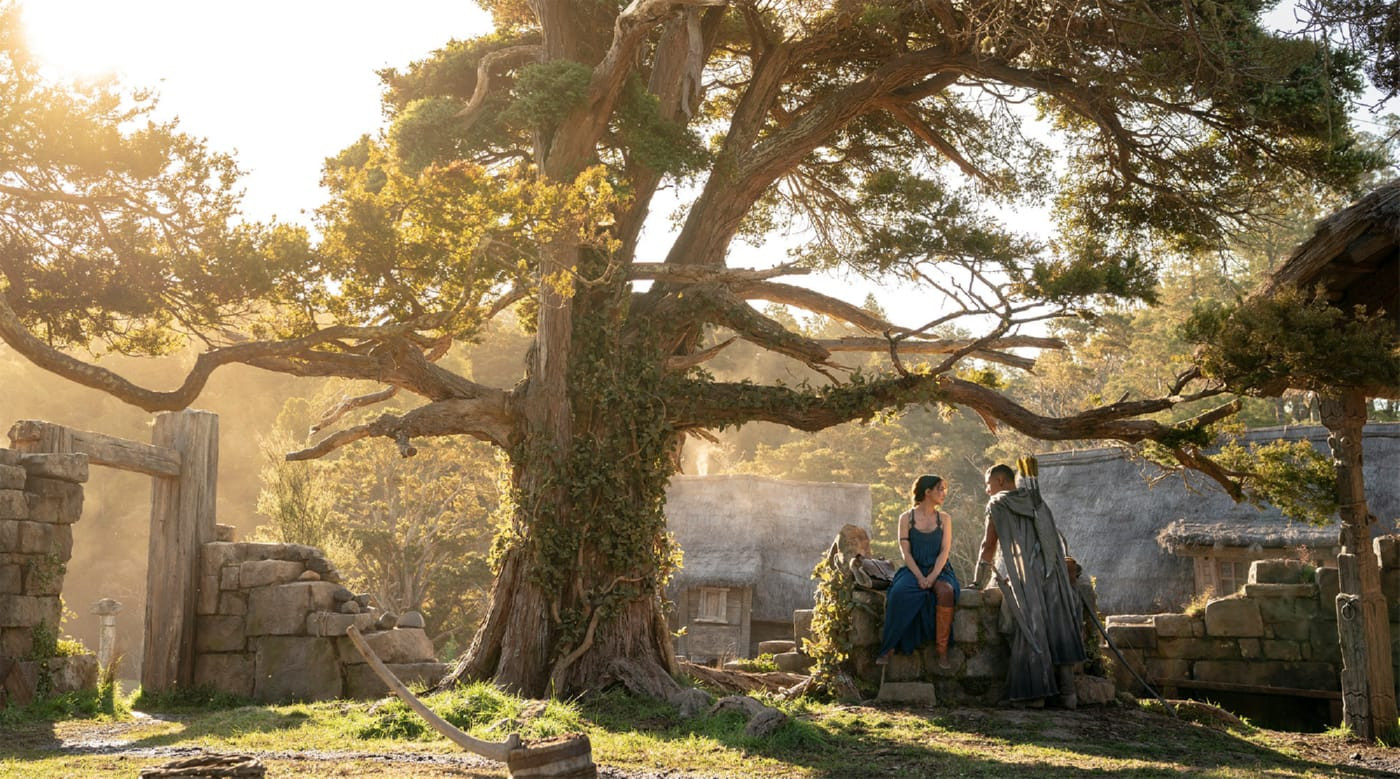 Still involving elves, the forbidden relationship between Arondir and Bronwyn (Nazanin Boniadi) is one of the most interesting new subjects on the screen. Unfortunately, it needs to be abandoned early to make room for the struggle against the greater evil. Nmenor’s performance is grand, even if its residents aren’t up to it. Whether construction fails, or the indication of the beginning of this civilization’s decay, we are yet to find out.

More prosperous presentation of Khazad-dm at the height of its civilization, with the character of Princess Disa (Sophia Nomvete) stealing attention in charisma, and expanding the mythology with her singing to the rocks. Speaking of little people, the most surprising, charismatic and unexpected core is hairy feet. Curious and adventurous Nori (Markella Kavenagh), makes the exact connection with the hobbits we know, as well as the nomadic community she is a part of, already brings some characteristics of the residents of the county. While the strange, in addition to planting a good doubt throughout the season, can bring a welcome backstory of a much-loved character. 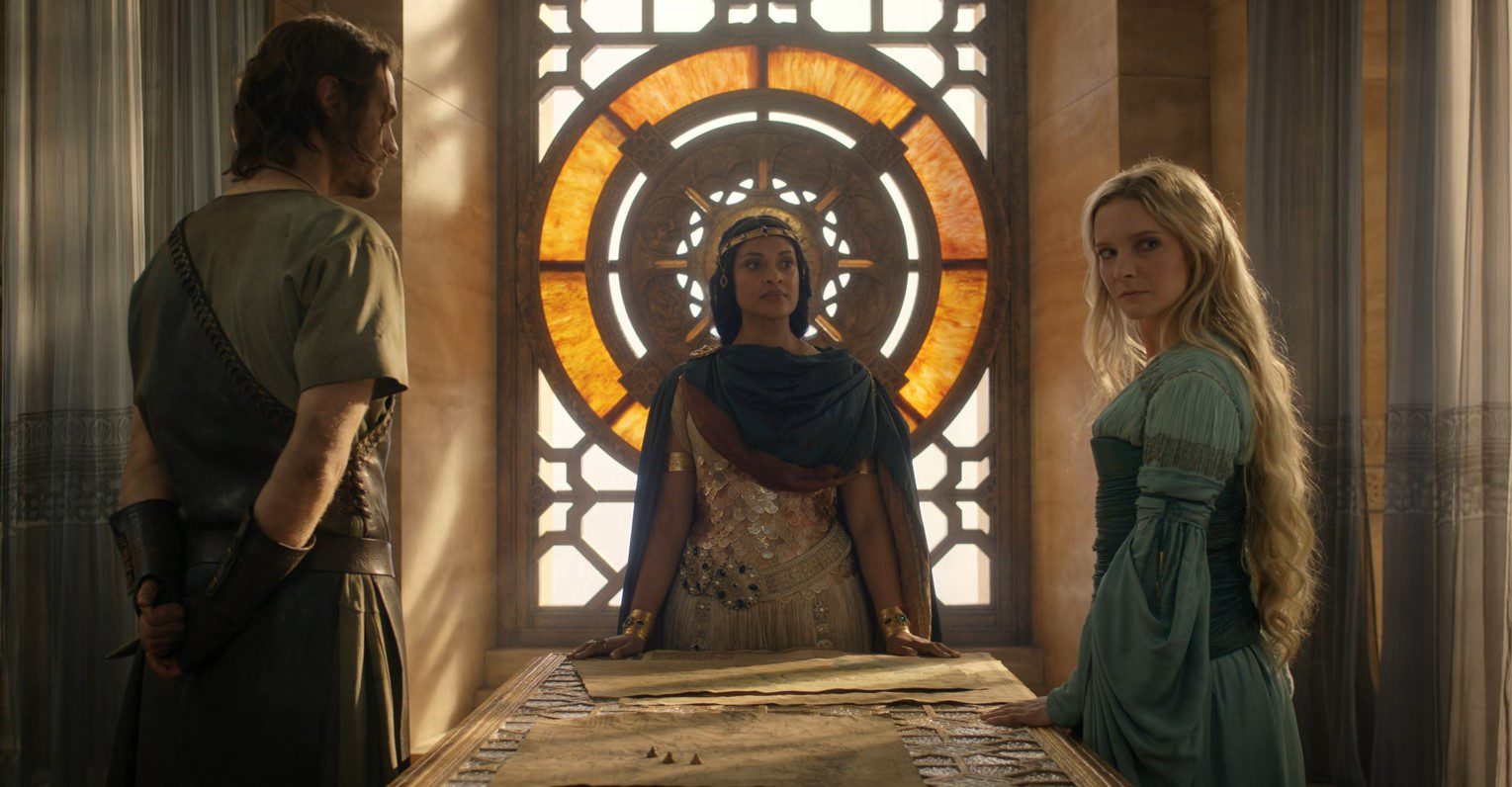 Hallbrand (Charlie Vickers) the most complicated character to assess. If on the one hand its true purpose, it provides an interesting twist and great impact to Galadriel’s journey. On the other hand, your own journey doesn’t make much sense. Finding the right person in a shipwreck, being rescued, finding a voice in a great civilization…there are too many uncontrollable factors to be part of a good plan. What makes us wonder, was he improvising? Had his fate been part of his plan from the start, or was it opportunity? Again, questions that might make sense in future seasons.

All the investment trumpeted by the series’ publicity can be seen on stage. The perfection of the special effects, the wealth of sets, costumes, wigs and makeup will make many blockbusters jealous. My complaint is about the design of the Numenorean boats. Where do the horses go in those little canoes? The design of the boats in CGI, also does not match the deck and the interior where the actors circulate. But everything else is dazzling, from the poor and worn-out areas of the peoples of the south, through the wealth of Nmenor, the grandeur of the elves, the complexity of Khazad-dm, the ravages of the orcs and the naturalness of the hairy feet. 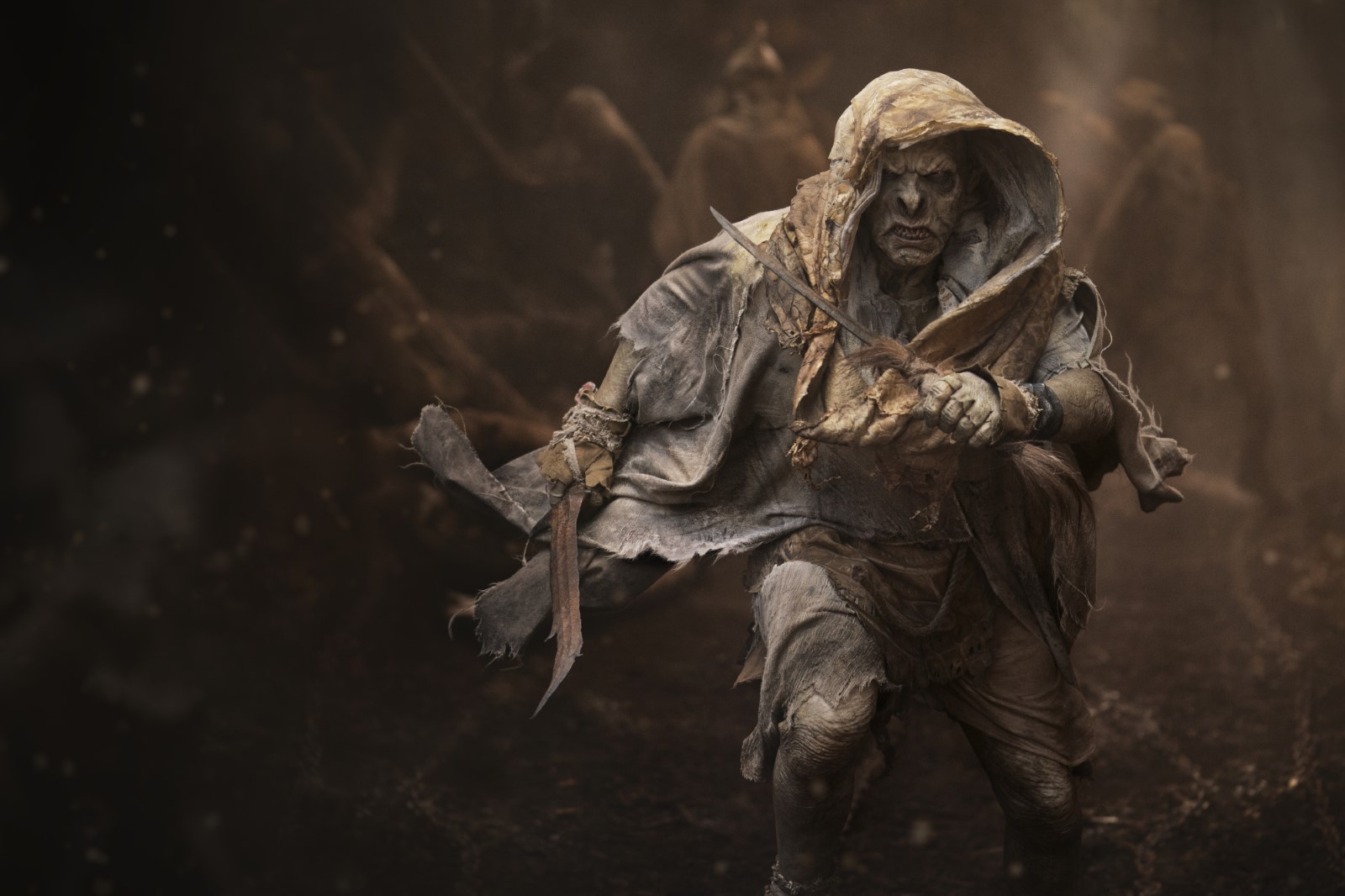 Despite having the same source material, the series’ design manages to print its own personality while referencing Peter Jackson’s films. The feeling that we are observing the same world, in another time. What actually, what happens. The familiarity is completed by the imposing soundtrack, which fearlessly evokes the soundtrack of the movie trilogy.

Such monetary investment did not reach the casting department, which opted for lesser-known faces. The presence of renowned and experienced actors could help make the plastered text mentioned earlier more palatable. However, a very well-known figure could overlap the character. At the end of the day, the casting choice works, most of them being quite efficient in what they’ve been asked to do so far.

A great and unhurried introduction. That’s the feeling you get from the first season of The Lord of the Rings: The Rings of Power. Prime Video’s overproduction is not without its flaws. It needs adjustments in its script, slow at the beginning and rush at the end, despite delivering exciting moments in the middle of the rush. well constructed enough to hook us and keep us interested for future chapters. Fortunately the second season is already in production.

The Lord of the Rings: The Rings of Power It has eight episodes of about an hour each, all of which are already available on Prime Video.